On September 1st 1829 two new magazines were delivered to subscribers or made available for purchase. The first issue of The Rev. Thomas Moore’s The History of and Topography of The County of Devon was published in London by Robert Jennings, 62 Cheapside, on that day. Each issue was octavo[i] (145 x 230 mm) with a paper cover and cost just 1s. This work contained descriptive text by Thomas Moore and E W Brayley. A partial set of these is held in Exeter[ii] and consists of 41 of the first 47 issues plus three parts to a subsequent edition issued as a collection of three numbers. The local (i.e. Devon) distributor of the initial series would appear to be Mr W Bennett of Russell Street in Plymouth.

Fishers’ Views in Devonshire and Cornwall could be bought from J Gibson at his address at 8, Lady-Well-Place in Plymouth or was sent directly from the publishers H Fisher, Son & Co. from their premises at 38, Newgate Street and from the offices of Jones & Co. in Finsbury Square, both London addresses. From correspondence quoted earlier it is clear that Gilbert was very much Fisher’s representative for the south west. The first and all subsequent issues at quarto size[iii] (230 x 300 mm) had buff paper covers and surprisingly cost just 1s. This work contained descriptive text by J Britton and E W Brayley.

Both of these works contained exactly 94 illustrations. The steel engravings (or etchings), utilising this new technology, were a similar size at approx. 170 x 120 mm: those of Moore when imprints are included; Fisher when a dedication is present. These were printed one to a page in Moore’s work and two to a page in the work written by Britton and Brayley, mostly one above the other, only occasionally side by side. While the views in the former work were more in the nature of embellishments to Moore’s text, having no direct relevance to it, the Fisher plates were specifically the subject matter of the text written; most of it by John Britton whose name comes up as author or editor of a surprisingly large number of works around this time.

The Rev. Moore’s comprehensive tome with its full title The History of Devonshire from the earliest period to the present by Rev. Thomas Moore. Illustrated by a series of views drawn and engraved by and under the direction of William Deeble, was actually designed with two text volumes in mind plus illustrations and this is often how it is found bound today; a contemporary binder would separate the three sections and bind them individually as three volumes. The first volume was a General Description of the county and ran to 574 pages. Volume Two, Biography, actually does only contain biographies of prominent Devon personalities, 234 in total, and ran to just over 900 pages. Volume Three is generally devoted to the views as they contribute little if anything to the letterpress.

The title page – the same title page is used for all three volumes even retaining the original 1829 date – only alludes to the Revd Thomas Moore, however, both the cover of the parts issue as well as the Address make reference to E W Brayley. On the cover he is E W Brayley, Jun. A.L.S. and in the Address we are told that at least one of two promised maps will be coloured to accompany Mr Brayley’s Outlines. The complete work, according to the list on page 3 of the introduction in Volume I, was actually to cover: The description of its surface will be followed by a general history of the county, ancient and modern; together with an account of its antiquities, its geological features, natural history, rural economy, and the state of trade and commerce; ecclesiastical history, general biography, and brief histories of the nobility and distinguished families connected with the county; and finally, a particular and historical description of the different towns, sea-ports, harbours, curiosities &c. Volume I was indeed split up into four books: Book I General Description (with Chapters on Etymology etc., Rivers etc., Navigation of Rivers etc. And Railways: Book II General History (with 2 Chapters on Original Population etc, Historical Events: and Book III on the Outlines of the Geology, Physical Geography, and Natural History, of Devonshire. This is credited to Brayley (pp. 237 – 408) with the note that The part contributed by Mr Brayley, Jun. Terminates here.  Moore wanted it to be quite clear that the bulk of the enterprise was his own work. Book IV consisted of 3 chapters and covered agriculture trade and commerce, mining and minerals, and finishing with the trade in manufactured products.

To a certain degree, the title page illustration is an indication of what was to be found. The page presents a rood screen at top with three coats of arms being those of the City of Exeter, flanked by the mayoral arms of Plymouth and an engraver’s imagination of a suitable coat of arms for Tiverton.[iv] Flanking the title of the work are two more coats of arms: those of the Bishop of Exeter and that of the Fortescue family also seen on the cover to the parts issue. At the foot of the page are four discernible works of Devon literature: Camden’s Britannia (1586) or more specifically The visitation of Devon which was carried out in 1620 by Henry St. George and Sampson Lennard under Camden's direction; Risdon’s Survey which despite being in private circulation for almost 80 years had only recently been published in full (1811); Sir William Pole’s Collections (published posthumously by his family 1791); and Prince’s Worthies of Devon (1701). The present work was to bring all these learned works under one roof. It would seem to be a Benjamin Martin project but only for Devon. 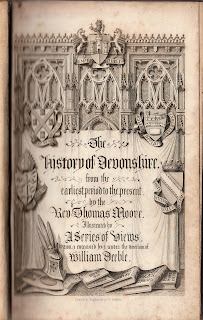 The text of Fisher’s Devon & Cornwall Illustrated; Exhibiting the Picturesque Scenery, Buildings, Antiquities, &c. of these highly interesting counties, from Original Drawings by Thomas Allom, and W H Bartlett; with Descriptive Accounts, forming brief County Histories, is credited to J Britton and E W Brayley, Esqrs. Although at first glance sounding every bit as dry as Moore’s title, each plate was provided with its own specific text which varied in length and in historical background depending on the subject matter.

Edward William Brayley (1801-1870) was already a well-known figure by the time Fisher employed him to write some of the descriptive text which was specifically written to accompany the illustrations being used. Brayley was born in London and although he led a sheltered childhood by all accounts he was able to study and became interested in all aspects of the natural sciences and was a founding member of both the Zoological Society and the Chemical Society as well as a Fellow of the Royal Society.[v] It is obviously interesting to note that Brayley contributed to both works under discussion here. In Moore’s work he refers to his visit to the county in 1825 (p243).

John Britton (1771-1857), too, was no newcomer having already established a reputation as an English antiquary, topographer, author and editor. Born in Wiltshire and made an orphan at an early age and with no apprenticeship behind him he drifted from job to job. However, he tried his hand at writing and at some point met E W Brayley who became his friend. Together they wrote a number of descriptions of counties under The Beauties of England series (Wiltshire was their first in 1801). Britton is credited with making topographical works more interesting[vi] and this is certainly true when comparing these two works. He had already had some Devon experience as The History and Antiquities of the Cathedral Church of Exeter had been published in 1826.[vii] Perhaps there is no better example of Britton’s proliferation of works and his importance to Fisher than the four page advertising flyer inserted at the back of Issue 5: here his name is listed in connection with no less than ten of the twelve works listed.[viii] The text of Devon & Cornwall Illustrated ran to just 106 pages.

The only person to remain a bit of a mystery is the Reverend Thomas Moore. Surprisingly, the University of Salamanca, which has a project to record dialect words and expressions, mentions Moore on its website. "Almost no certain information has been found for this author. He is frequently confused with other Thomas Moores.“[ix] They go on to relate that there is an Obituary for him in the Hereford Journal, 7th Sept. 1842, give his dates as Minister between 1795 and 1809 and suggest he was born in Dartmouth.

Apart from the enticing possible Devon connection the rest would appear to be correct. An entry in The Christian Pioneer Band 16 has a Monthly Record entry for December 1. 1842. Here there is an obituary for the Rev. Thomas Moore who died in Islington on August 23rd, 1842, at the age of 76. He was Minister at the Unitarian Chapel of Kingswood, Birmingham. The obituary mentions three of Moore’s writings including “an admirable Sermon against Cruelty to Animals” … “an elaborate and beautifully illustrated History of Devonshire" and an "ingenious Essay on Social Worship" etc." Apparently he left an aged widow, “and a large family of children and grandchildren.”[x]

Ian Maxted has discovered more accurate records and Thomas Moore was born in January 1767 (baptised on 13th January) in Leicester at the St Mary de Castro church (two possible siblings are buried there). He married Frances Scott on 4th August 1789 in Leicester. He was admitted to the Academy at Daventry and served as mentioned. At some time he must have moved to Islington with his family and he died there. His wife died five years later and was also buried in Islington. They had ten children together.

It is apparent that Moore had no connection with Devon. From a letter found in a copy of Moore’s History previously belonging to the Rev. George Oliver it is clear he was approached by the publishers to write the copy. From the letter it also emerges that by 1833 he was becoming very frustrated. 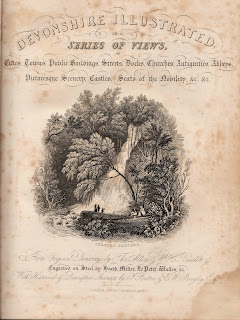 Link to next section:

[i] The text seems to have been assembled as one gathering of 16 pages (8 leaves) and one gathering of eight pages. Octavo is the form referred to in the Address although other formats were available.

[ii] The Devon Heritage Centre in Exeter. The series was inspected by Ian Maxted. The catalogue entry is inaccurate as it fails to mention the second series. The author also has copies of the first six issues.

[iii] The text was one double page to form a four page (2 leaf) gathering.

[iv] The castle, church and town of Tiverton above a representation of a woolpack with motto Sigillum Oppidi Tyvertoni; see Encyclopaedia Heraldica.

[viii] The works range from The Cathedral Church of Exeter (which takes up half the space available) to A Narrative of Memorable Events in Paris, Britton providing a Preface and Concluding Remarks.

[ix] See www.thesalamancacorpus.com/varia_s_dev_1800-1950_rev-thomas-moore_bio. In Book IV, pp. 506-510 there is a short List of some of the provincialisms which is of interest to the Salamanca corpus project.

kitthemap
The blogs are either proper blogs, i.e. travel blogs, produced to provide my family some entertainment while I am away; or I use it to catalogue things, such as my maps, without opening a dedicated website.